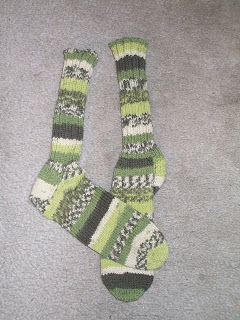 I knit this pair while on a tour to Utah and Idaho over the last four days. These are bigger than they look, since I do a very stretchy ribbing on the leg and it pulls in a lot. These fit about a ladies' 6-6.5 foot. I try to make the leg at least as long as the foot; these go up about mid-calf on me.
The yarn is Kashmira Pattern which I purchased at Joann's for making A4A socks. It's 100% wool, multi-ply. I got a lot of comments on the fact that it creates this pattern, a couple people kept asking "but how DO you make the stripes" and couldn't wrap their minds around the multicoloured ball and the pattern on the socks.
I could have made these longer, but I gave a wad of the yarn to a baby (about 6-8 months old) who sat next to me on one of the plane flights. He was fascinated by the yarn during the flight, and when he would not stop fussing on the long descent (a storm required us to be buttoned down earlier than typical, and he had been VERY well-behaved before that) I simply handed the ball to him. Instant silence, followed by cooing, giggling, and chewing. I assured his parents it's chew-safe, washable, and would not be harmed. Since it was so clearly a winning toy and they had another long flight ahead, I trimmed off the yarn (I was working the socks from each end) and handed it to the father before they disembarked. He kept thanking me. I said if it got too loopy, they could just wind the yarn in a ball and start over.
Posted by MargoLynn at 6:27 PM

They look wonderful! I have seen that yarn and it is amazing---I'd like to talk to the person who invented it!

I give wads of yarn to little kids too. They do like it a lot!