I tend to knit very plain things for afghans for Afghans -- not because I don't think the Afghan kids aren't worthy of my "best," but because by doing that I can finish more things, so more kids get something warm. This hat is as plain as it gets.

I am starting one now, and will add the picture later today -- it goes that fast. 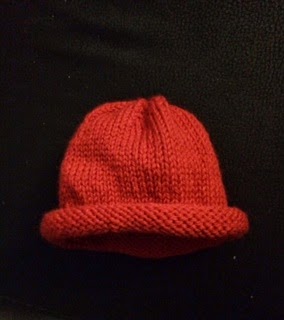 edited to add this picture (the hat is actually a beautiful clear red, but I haven't been able to get the camera to agree)

Materials: 1 ball worsted weight yarn such as Cascade 220, Galway, or Paton's Classic Merino (will make more than one hat)
double-pointed needles of size needed to get 5 stitches per inch (20 sts/10 cm)

edited to add: the yarn I picked out of the odds & ends box was a little thinner and knit up at 6 sts/inch, giving me a hat that's just about 11 inches around, perfect for a newborn. I wrote the pattern to make a hat a little larger, so it will fit for longer. Remember -- these babies are not going home to piles and piles of new clothes, so the longer something lasts, the better.

Cast on 64 stitches. Join to knit in the round, being careful not to twist.

Break yarn and thread through the remaining 8 stitches, drawing thread tight. Pull yarn to the inside of the hat through the center of those stitches. Weave in ends.

To work flat: Follow instructions as written, EXCEPT work stockinette as knit one row, purl one row. When you get to the crown decreases, work rows 2, 4, and 6 as purl rows. Work decrease rows 8 and 10 on the purl side, as purl stitches. Break the yarn, leaving a tail long enough to sew up the seam. Draw the yarn through the remaining 8 stitches, and then sew a flat seam to finish the hat. Use mattress stitch or a whip stitch -- something that will leave as little bulk as possible, to make it more comfortable.

Want to control how far the rollbrim rolls? Here are two ways to do that:

(1) work the first 6 rows on needles one size smaller, or
(2) Work 6 rows, then insert a garter ridge as follows:
(a) if working in the round, purl 1 round
(b) if working flat, knit the 7th row instead of purling it. Then return to stockinette.