Why I love taking taxis ...

Last Saturday, I called for a ride to SFO. The taxi arrived a little late. How aggravating! The delay was because SF was invaded by the Outside Lands concert in Golden Gate Park. Always something, especially in the summer. Still, airport rides usually get pushed to the top.

I am talking with the driver and trying to relax and not worry about the time. We're bemoaning the city's growth as we cross town. He tells me he grew up in the East Bay. This is his first month on the job. I want to guess his homeland, always my favorite taxi game. "John" Rahimi says he's from Mazar-i-Sharif. I would not have guessed that! He's been called John ever since school when the name was easier for classmates. I told him that I ate in the Helmand Restaurant last week and had my favorite Aushak dish. We're on the subject of food. I bring up Bolani. Guess what? The East West company was founded by his sister. Remember when I posted about Bolani here? Small world! I told him about a4A and handed him my card. I told him about my 1999 visit to the NW Frontier Province when Afghan refugees were pouring over the Khyber Pass. I floated the idea that getting a trademark on bolani is like trademarking tamales. He laughed. We could have gabbed together for hours if I didn't have a plane to catch.

Nice man. I will call Zalmi whenever I need a ride to the airport. That was the right cab for me, wasn't it. 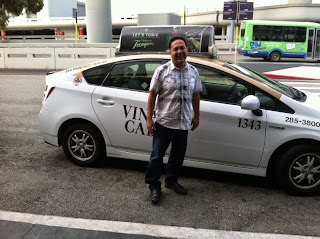 I love taking taxis because you meet drivers originating from all over the world (and/or drivers with colorful stories about SF when you could make a living doing the job). Pink furry mustache, not for me.

PS: If you are ever in SF and need a taxi to or from the airport, email me for John's phone number.
Posted by Afghan Ann at 1:21 AM