A4A always gets fewer of the things that come in pairs -- i.e., socks and mittens. It's true, once a hat is done, it's done. But think of your own kid or a kid you know out on a snowy day with no socks or mittens, and you may feel inspired to give it a shot!!

I'm posting a basic, possibly too long-winded, pattern for a sock to help you out. If you are working with a hefty, "rustic" type of worsted such as Bartlett or Peace Fleece, the following sock recipe will fit kids in the 7-12 age group. If you're using a lighter worsted, such as Galway or Cascade 220, the 40-stitch sock in the series of lessons I posted a couple of years ago (link in the sidebar) will work better.

(Also, if you have bulky yarn -- such as Lopi or Lamb's Pride Bulky -- you can follow the directions for the smallest mitten size in this pattern -- the one that starts with casting on 28 stitches -- and get a well-proportioned mitten that will fit the bigger kids.) 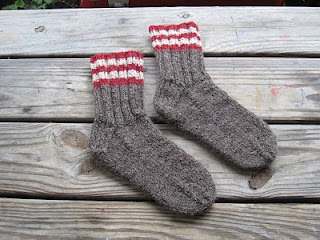 
If you are an "average" knitter, and usually match gauge with the needle recommended in patterns, use size 7 double-pointed needles. If you knit loosely, use 6s or even 5s. If you knit tightly, go up to 8s. You want a gauge that is firmer than sweater gauge.

Leg:
Cast on 36 stitches, using a stretchy cast-on. (If you do not know a stretchy cast-on, use a needle 2 sizes larger than you will be using for the sock -- just for casting on. Switch to the smaller needles to knit the sock.)

Knit at least 2 inches in the ribbing of your choice -- k2 p2 or k1 p1. You then have the option of continuing in ribbing or switching to stockinette.
Work until the leg, from cast on to the stitches on the needles, measures 6 inches, finishing at the end of the round.

Heel flap:
Counting the last stitch you worked as #36, place stitches 19-36 on a strand of yarn and save them for later. Move the remaining stitches so stitches 1-18 are all on one needle.
You will now work the heel flap back and forth, using just two of your needles.
Row 1: *slip 1 as if to purl with yarn in back, knit 1* -- repeat between asterisks all the way across. You will end with a knit stitch.
Row 2: slip first stitch as if to purl, with yarn in front. Purl across until there is one stitch left. Move yarn to back and knit that stitch.

Repeat heel flap rows 1 and 2 until you have worked 18-20 rows -- whichever looks good to you.
Work row 1 one more time.

Work gusset:
Take one of your empty needles and, starting on the side of the heel flap where your working yarn is waiting, pick up stitches along one side of the heel flap. You will see a convenient line of V-shaped stitches along the side of the flap.
I prefer to pick up the stitches by sliding my new needle under both legs of that V, then "knitting" through it with the working yarn. Pick up a new stitch for each V along that side edge, all the way to the end of the flap.
Now it's time to put your 18 instep stitches back on a needle. Slide the needle back in along the path marked by your holder yarn. I leave that yarn in place -- it makes an easy marker to count from to match the second sock to the first, or if it's necessary to rip back. You may prefer to remove it. Either way is OK. Knit across those 18 instep stitches.
Now pick up stitches along the second side of the heel flap. Follow the same technique you used on the first side, making sure you have the same number of stitches here as on the first side. (Sometimes you have to "invent" one to make this happen.)

Now all 4 of your needles are full of stitches. What to do? With the needle that just finished picking up your heel flap stitches, knit 5 stitches from the next needle. Slide the other 5 stitches onto the next needle. You are now at the exact center of the back of the heel, with your stitches on three needles and the fourth needle free. You have 18 stitches on your instep needle, and 15 stitches on each of the side needles. (Sometimes I get an extra stitch, for 16 -- as long as both sides are the same, that's fine.)

Work one round plain.

Now you will gradually decrease the number of stitches on those side needles, until you're back to 9 on each. The 18 stitches on the instep needle remain constant. Work as follows:

Foot:
Continue in stockinette until the foot of the sock, measured from the back of the heel to the stitches on the needles, measures 6.5 to 7.5 inches.

Toe:
Start decreasing for toe as follows. (Each round begins at the center of the heel -- the point between the 2 side needles.

You will graft the instep stitches to the back stitches, a procedure known as grafting, or Kitchener stitch.

It's an easy rhythm: one off, one on, switch needles. One off, one on, switch needles. Just pay attention to which way you're putting the sewing-up needle through the stitches. "As if to knit" means left to right; "as if to purl" means right to left. You should get a magical row of little V's, like stockinette stitch. If you get little U's, like garter stitch, you're putting your sewing-up needle in backward.

Last stitch -- thread yarn through and snug it up. This always gives me a nasty little point, sometimes called an "ear." I don't know if this is technically proper, but here's how I make it go away. With sewing-up needle, move one stitch away from the toe, into the sock, pull the yarn all the way through, and give it a little tug. It should disappear. You might have a tiny little bump left, but it smooths right out.

Oops -- I forgot the link for the mitten pattern. I will go back and add it in, but for those who are reading before I do that, go here:
http://www.afghansforafghans.org/mittens.html