Sized for a big kid and to be worn over other garments. Finished chest circumference: 34". Sleeve circumference: 16". Depth of yoke, measured along the raglan "seam" (not straight up and down): 10". Sleeve length from underarm with ribbing turned up: 15" (18" with ribbing turned down). Length of body from underarm: 16". Yoke is knit down from the neck and shaped by paired increases, one on either side of four "seam" stitches. Shaping is minimal. No seams to sew. Sweater can be worked in one or two colors, or as you wish.

YOKE:
Using size 15 circular, cast on 32 stitches and join in round.

Note: Now you will start increasing by knitting into the front and back (kfb) of the indicated stitch.

Round 2: Knit, slipping markers along the way.

Repeat rounds 1 and 2, thus increasing in every other row by 8 sts, until you have 28 stitches in each sleeve top and 34 stitches in back and front (not counting the 4 seam sts).

STOP and check measurements. At this point, you have knitted 24 rounds. The raglan seam should be about 10" in length to ensure that the yoke is deep enough. A little longer is better than a little shorter.

LEFT SLEEVE:
Cast on 2 sts, with a marker between them to identify the center. Join the sleeve stitches in round. 32 sts on the needle. Continue to knit in rounds, slipping the marker, until the sleeve measures 2" from the underarm.

Next round (first decrease round): Knit to 3 stitches before the marker. Knit two together (k2tog) k1, sm, k1, k2tog (or ssk if you prefer). 30 stitches on needle.

Knit in the round until sleeve measures 4" from underarm.

Next round, decrease as in first decrease round.

Knit in the round until sleeve measures 8" from underarm.

Next round, decrease as in first decrease round.

Knit in the round until sleeve measures 10.5" from underarm.

Next round, decrease as in first decrease round. 24 sts on needle.

Knit another 2 or 3 rounds, as necessary, until the total underarm length is 12".

Cuff Ribbing: Switch to smaller needle. K1, p1 around and continue in 1x1 ribbing for a total of 6" of ribbing. Total sleeve length, from underarm, is 18". Bind off LOOSELY. Cuff can be turned up for a shorter arm or down for more length.

RIGHT SLEEVE:
Join yarn at right front and knit as for left sleeve, casting on 2 sts at underarm.

BODY:
Join yarn at left front/start of round. Pick up and knit 2 sts in the 2 cast-on stitches under the left arm, placing a marker in the center of each pair of picked-up stitches to identify the underarm line to center future decreases. Knit 34 back stitches. Pick up and knit 2 stitches in the 2 stitches cast-on under the right arm, placing a marker between them. Knit the 34 front stitches. 36 sts front, 36 sts back, for a total of 72 sts.

Continue knitting in rounds until the body measures a minimum of 13" from the underarm. If you have excess yarn (aside from what you need for ribbing and neck), you can continue knitting a few extra rounds here to make the torso longer for added warmth.

Switch to smaller needles and knit 3" of 1x1 ribbing. Bind off LOOSELY.

MOCK TURTLENECK:
Using size 15 needles, pick up and knit one stitch for each cast on stitch of the neck. 32 sts on needle. Knit 6 rounds. Bind off VERY LOOSELY. As you knit each stitch, make sure you pull up a loop at least 1" long. These stitches may look huge, but once done, they'll look fine. Try on the neck. The neck should glide easily over your head! If it doesn't, it won't fit over anybody else's head either.

Thanks to Maureen for this pattern. Thanks to Pam Taylor for testing the pattern and editing help. This pattern is designed to be even easier than the bottom-up raglan pattern previously posted by Lisa. Less shaping and less risk of insufficient underarm gusset space (bulky needs more ease), as well as the benefit of being able to add to length of torso and sleeves at the end. 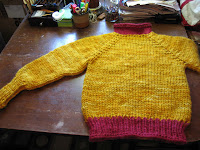 (Photo and test-knitted sweater by Pam.)

Sorry that this long post moves Laura's pattern down the page. I hope people see Laura's raglan for worsted-weight. Worsted-weight makes an excellent sweater, and, surely, most people have odd balls of worsted around. Very practical. We posted this pattern for super-bulky because we still have some of the donated super-bulky yarn in circulation. Thanks, Ann

This pattern was edited on 3/23. Edit was made to sentence that starts "Next Round; Knit across left front seam stitch ..." This sentence is above "LEFT SLEEVE." Change made for clarity.

Reposted here by Ann for Maureen

Hi, I'm Maureen--I've been volunteering with a4A for quite a while but this is the first time I've been on the blog. Some of you have sent me checks for postage for our donated yarn distributions and have received those USPS flat rate boxes full of yarn!

I've now knitted several items from the super bulky yarn called for in the new pattern and I have plenty to say about it. I'd be happy to try to help with any problems people might be having with the pattern, too. It really is an easy pattern. I don't think it could be any easier and still be a sweater. I think Pam and I came up with clear directions. But I've never knitted a pattern that didn't bring me to a halt at some point and that is what I am here for.

. . . what Ann said, re worsted weight vs. bulky. We got this generous donation of super bulky yarn and had to develop our own patterns because so few suitable free patterns were available. People should not feel like super bulky is something they should aspire to. It needs special handling. Worsted weight is really the most practical choice for the Afghan children

Super Bulky Donated Yarn Knitters, please check as soon as possible to be sure that your cast on fits over your head. The sweater is sized for a big kid whose head is the same size as yours! The 32 stitch cast on should fit easily! You may want to consider casting on with a bigger size needle; this yarn isn't as stretchy as pure wool.