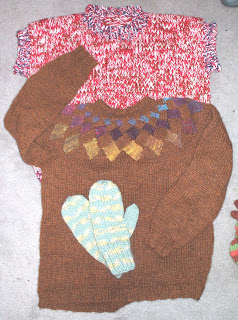 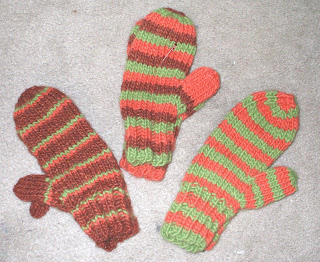 Mittens are to me what socks are to some other people: Small and easy to carry around and do anywhere. So I have four pairs finished. The photo below shows three made of Tahki Bunny which is a wool-angora mixture and very soft. I did the one on the right first, weighed the yarn, and had exactly as much left as the mittens weighed. Then I found the brown, and decided to play mix-and-match. All of the mittens are fraternal twins, with striping patterns reversed, and the pair in the middle has thumbs of different colours. I probably should have unpinned them for the photo so you could see this more clearly.
The fourth pair of mittens (oddball wool) is identical twins. I thought I might overdye them but striping the solid and the multi made the yellow a very minor element and I don't think I shall. The vest may look familiar as it's the same yarn I used for a crocheted vest the last round. I thought I had enough for sleeves - but no. So it's a Steepes Vest. Since the yarn was thinnish I added a strand of blue in the ribbing and warm brown in the body. The other is a pullover of Lopi Lite and Kureyon; I wanted to try the entrelac yoke. The colours are great but not something I'll wear.

Posted by MargoLynn at 3:41 AM

I love the yoke on the sweater. Where did you find the pattern?

I love the entrelac yoke, too! Please do share the link to the pattern.

I think I just did a combination of a standard Icelandic sweater on the bottom, and for the yoke adapted a pattern out of an old Threads magazine. I believe one of the Threads knitting books has it too. The original was all entrelac but I just did the yoke in it.