So you've finished the leg of your sock. Now it's time to work the heel flap. First, divide the stitches in half. 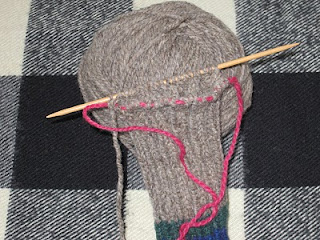 You'll put one half on a stitch holder and work the heel on the other half. Divide the stitches so the working yarn is coming out of the last stitch of the group you are going to put on the holder, ready to work the first heel stitch. Some people use a knitting needle as their holder; others use those holders that look like a giant safety pin. However, because those are straight and not flexible, and actually do weigh a little bit, they have a tendency to stretch out your corner stitches, leaving unsightly holes later on. So -- use a length of contrasting yarn. Thread it through your 18 (20) instep stitches, and remove those from the needle. You now have half your stitches on a strand of yarn, and the other half on a single needle. The working yarn is ready and waiting.

(Be careful, on the first stitch of the heel flap, not to pull the yarn so tight that you close up the last stitch on your holder -- you will regret it later).

Heel flap
For the heel flap, you knit back and forth, as follows:

row 1: slip 1, knit 1, slip 1, knit 1, continuing in this pattern all the way across and ending knit 1. (If you did not end with a knit stitch, you goofed -- undo and fix it.)
row 2: slip first stitch as if to purl, purl the whole row until just 1 stitch is left, move yarn to back, knit last stitch.

Repeat those two rows until you have worked 17(19) rows. You will end having just worked a knit row. 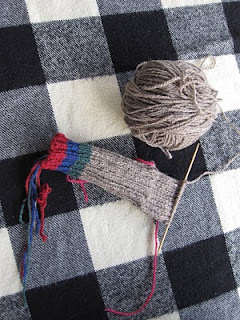 Turn heel
This part is just plain magic! It's not complicated, but it's hard to describe without a lot of words. If you haven't done this before, don't think too hard -- just follow the directions step by step.

You have formed a nifty little pocket, just right to cradle the bottom of the heel. 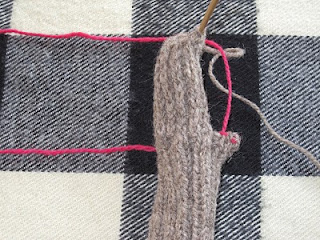 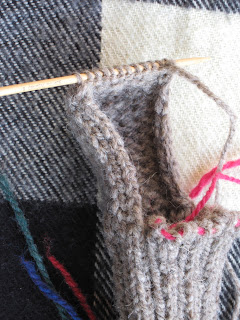 Now you have to get all the other stitches back on the needles and knit the gusset, a triangular section that accommodates the ankle.

I prefer to pick up the stitches by sliding my new needle under both legs of that V, then "knitting" through it with the working yarn. Pick up a new stitch for each V along that side edge, all the way to the end of the flap.

Now it's time to put your 18(20) instep stitches back on a needle. Slide the needle back in along the path marked by your holder yarn. I leave that yarn in place -- it makes an easy marker to count from to match the second sock to the first, or if it's necessary to rip back. You may prefer to remove it. Either way is OK. Knit across those 18(20) instep stitches.

Form gusset
Now all 4 of your needles are full of stitches. What to do? With the needle that just finished picking up your heel flap stitches, knit 5(6) stitches from the next needle. Slide the other 5(6) stitches onto the next needle. You are now at the exact center of the back of the heel. You have 18(20) stitches on your instep needle, and 15(16) stitches on each of the side needles. (Sometimes I get an extra stitch, for 17 -- as long as both sides are the same, that's fine.)

(People sometimes like to continue the ribbing down the foot; for thick socks like these, I think it's more comfortable to do the foot in plain stockinette, so that's how these directions continue.)

Work one round plain.

Now you will gradually decrease the number of stitches on those side needles, until you're back to 9(10) on each. The 18(20) stitches on the instep needle remain constant. Work as follows:

Next installment: the foot

Thanks, Elizabeth. I think you're a great knitting writer - these are quite clear instructions for a flap heel.